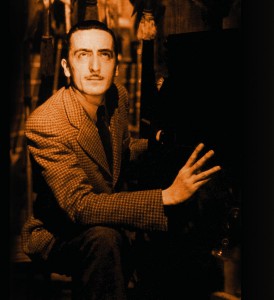 “As a director I always made the wrong steps. My first two big mistakes were: first, I just can’t stay serious for more than two minutes, and when a producer meets a director who doesn’t wear glasses and a severe, angry face… well, he thinks the latter’s no director at all; second, I always tried to make do with what they gave me. You see, if I needed a big, fast car for a scene and they gave me a small, old one, I should have gotten angry and yelled until they’d give me what I wanted. But I’d shrug my shoulders and change the scene instead. The result? Instead of saying ‘Bravo! You saved us a lot of money!’, the next time I asked for a car, they gave me a bicycle…”
– Mario Bava

“My father and Fellini were great friends, they knew each other even from before the war. They would always joke and play, they were very close. Among the auteurs Mario Bava was recognized as a great technical and special effects expert. For example, during the shooting of my first film as assistant director, Planet of the Vampires (Terrore nello spazio, 1965), all the major exponents of Italian cinema, including De Sica, would come and visit my father’s set, intrigued by his ability to create amazing scenes with very few means. It was then that I realized how important he was.”
– Lamberto Bava

With its second edition Kurja polt (= Goose Flesh) weekend-festival of horror cinema’s cults, classics and genre-bending renegades moves to April and delivers on its promise to accompany the old masters with fresh young blood. Our contemporary programme will include a fistful of full-blooded horror films and some of those renegade festival favourites, films of extreme discomfort and unease, which bend and transcend genre conventions, but make your skin crawl all the same. We present the latest film from the Belgian contemporary horror genius Fabrice du Welz, winner of the European Fantastic Film Festivals Federation’s Méliès d’Or award Alleluia (Alléluia); one of the funniest horror comedies of late and a festival audience favourite, the New Zealand vampire mockumentary What We Do in the Shadows by comedy duo Taika Waititi and Jemaine Clement; James Franco’s pitch-dark and grisly adaptation of Cormac McCarthy’s novel Child of God, three very distinct “character studies” one could say tongue-in-cheek…

In accordance with its creed Kurja polt festival also looks back and delves into the history of cinematic horror, proudly presenting the fruit of unyielding search through the archival vaults across Italy and beyond: the retrospective Mario Bava 101, the crowning jewel of this year’s festival – which we therefore christen LA PELLE D’OCA. In 2014 we celebrated the centennial of Mario Bava’s birth, and with it the life and work of this master of horror, a virtuoso of cinematography and a genius wizard of special effects, the godfather of Italian Gothic cinema and the indigenous giallo, an exemplary and inspiration to filmmakers from Dario Argento to Federico Fellini, from Martin Scorsese and Francis Ford Coppola to Roger Corman, Tim Burton, Sam Raimi, Joe Dante and Quentin Tarantino. But since every year is ripe time for celebrating the work of Mario Bava, we pay homage to the filmmaker on the no less prominent 101st anniversary of his birth, with an elementary “101” course in the cinema of Mario Bava. The retrospective will showcase Bava’s masterworks from the most brilliant, influential and ground-breaking examples of the Italian Gothic (Black Sunday, Kill, Baby…Kill!) and giallo subgenre (Blood and Black Lace), to the anthology horror film that inspired the name of the seminal heavy metal band (Black Sabbath), the granddaddy of ‘body count’ slasher film (Twitch of the Death Nerve aka A Bay of Blood), and a rare Bava crime thriller, the long lost masterpiece of Italian poliziottesco (Rabid Dogs).

Mario Bava made his directorial debut, the absolute horror film classic Black Sunday, at the age of 46. The rest is history, as they say, but also the body and soul of Kurja polt 2 and the retrospective Mario Bava 101. Attendance: compulsory!