“I am convinced that the only people worthy of consideration in this world are the unusual ones. For the common folks are like the leaves of a tree, and live and die unnoticed.”
– The Scarecrow in The Marvelous Land of Oz, L. Frank Baum, 1904 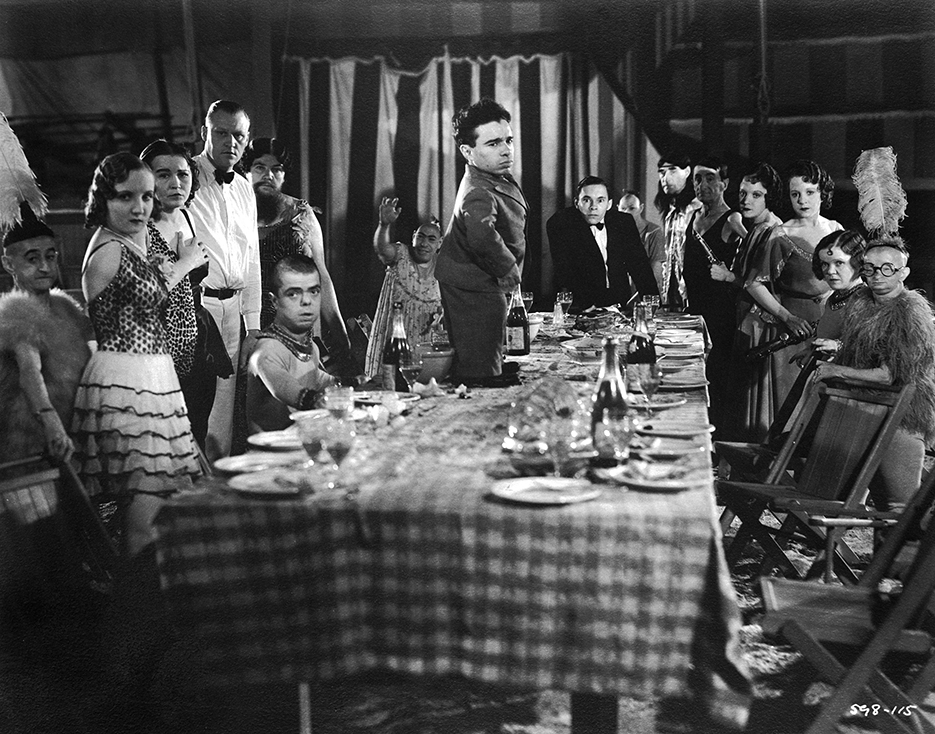 Social deviancy, mental aberrations and biological anomalies have long dominated the obsessive imagination of genre cinema. Its stories are inhabited by fanatics, freaks, outcasts and weirdos, whose ranks we gladly join as genre freaks. After all, one man’s trash is another man’s treasure, and a stigma can be proudly worn as a badge of honour and a symbol of our strange fellowship!

For this year’s retrospective, we have chosen a title that is broad enough to embrace all the aforementioned characters, flexible enough to carry not only negative but positive connotations, and a title which allows us to pay tribute to a timeless cult classic: Freaks! The word freak, in its more or less derogatory and politically incorrect terms, denotes the physically abnormal (freak of nature), the eccentric or weirdo, the enthusiast or fanatic. In the sumptuously excessive spirit of cult and exploitation cinema, we have dialed this freakery up to eleven and gathered a colorful troupe of film freaks, inhabiting a diverse and geographically dispersed universe of veritable cult classics, overlooked gems and genre-bending renegades that may not strictly belong in the pantheon of genre cinema, but find a loving home among us freaks!

The earliest film from which this year’s retrospective takes its name is the notorious cult classic, and one of the most unique films in Hollywood history: Tod Browning’s Freaks (1932). With an astonishing cast of real circus performers, Browning issues an impassioned battle cry in this unflinching ode to outcasts around the world. From surrealist genius of post-war Italy and anarchic maestro of provocation Marco Ferreri comes one of cinema’s strangest love stories. The Ape Woman (La donna schimmia, 1964), starring beloved French actress Annie Girardot in the title role scandalized audiences at the 1964 Cannes Film Festival. Both Browning’s and Ferreri’s films experienced a heavy hand from producers and censors. But while scenes from Freaks have been lost forever from the cutting room floor, we are delighted to officially open this year’s festival with the unexpurgated director’s cut of The Ape Woman! British director Michael Reeves, whose untimely death haunts the history of British genre cinema, will steer our freakery into the troubling realm of folk horror. Reeves’s third and final film, Witchfinder General (1968) is nothing short of a British cult horror classic, one which he completed over two years from the age of 23 before dying tragically months after its release. The film, which takes its inspiration from real historical figure and self-fashioned witch hunter Matthew Hopkins, fits neatly within the tradition of British folk horror while signaling its independent spirit through its disturbing condemnation of humanity’s evil, perversion and opportunism. In an occult double bill, Witchfinder General will be foreshadowed by three afro-futurist witches rendered by Nigerian filmmaker C.J. ‘Fiery’ Obasi in his short film Hello, Rain (2018). Because nothing channels unbridled weirdness more than exploitation and in particular sexploitation film, our parade of filmic freaks will include the queen of outlandish characters, the magnificent Dyanne Thorne in the Ilsa franchise’s most humorous incarnation: Ilsa, Harem Keeper of the Oil Sheiks (1976). Conjuring the sounds of electropop and the spirit of the 1980s, The Fan (Der Fan, 1982) will transport us to yet another fantastical dimension. This hidden gem of West German genre cinema observes the morbid romantic obsessions of a teenager, a truly deadly amour fou that creeps towards its inevitable conclusion with agonising languidness. The crown and chronologically last of our retrospective is Spanish auteur Agustí Villaronga’s debut feature. The murky and nightmarish allegory of fascism In a Glass Cage (Tras el cristal, 1986) is not simply an astonishing and astonishingly transgressive film, but an unmistakable cinematic triumph.

Our Homage this year goes to the maestro of Italian genre cinema and all-round renaissance man, Sergio Martino. In a career spanning four decades, the scope of his work is truly remarkable: from the early Mondo shockumentaries and Spaghetti Westerns, to cannibalistic adventures, post-apocalyptic action and science-fiction, beloved sex comedies, political crime thrillers or poliziotteschi, through to the supreme and most coveted of cult genres, the giallo. In the treasure trove of Italian giallo film from the beginning of the golden period of the 1970s, Martino made some of the most prestigious and seminal examples of the genre with pictures such as The Strange Vice of Mrs. Wardh (Lo strano vizio della signora Wardh, 1971), All the Colors of the Dark (Tutti i colori del buio, 1972) and the stylish and sensuous enigma Your Vice Is a Locked Room and Only I Have the Key (Il tuo vizio è una stanza chiusa e solo io ne ho la chiave, 1972), closely followed by Torso (I corpi presentano tracce di violenza carnale, 1973). One of the most gleefully debauched films of the period, Torso is certainly the most freakish example of the gialli, with its unbelievable premise and horrifically comedic murders constituting something of a prototype for the slasher film. This ultra-cult classic represents the pièce de résistance of our homage to the maestro.

The Contemporary section will tie in two exceptionally unique anti-war epics. From cult auteur of Japanese cinematography, non-conformist and impassioned pacifist Nobuhiko Obayashi comes Hanagatami (2017), a dreamily fantasmagorical vision of the evening preceding Japan’s military attack on Pearl Harbor. While the multitalented Filipino enfant terrible Khavn De La Cruz offers a surreal and reflective representation of the 1901 Balangiga massacre under American occupation in Balangiga: Howling Wilderness (2018). Although these films transcend the generic frame, they decidedly belong to the wildly audacious, daring and different cinematic language and ethos to which our festival is dedicated. And as films against war, they simply must belong to us all. But have no fear, the festival will satisfy also the more full-blooded genre appetite. The brilliantly retro Knife + Heart (Un couteau dans la coeur, 2018), shot on 35mm film by writer-director Yann Gonzalez, is a thrilling whodunit and an eerie reincarnation of the 1970s. Khavn De La Cruz’s second newest feature, Bamboo Dogs (2018) is a politically loaded fusion of police thriller and road movie, charged with a dark condemnation of systematic corruption in the Philippines. As we shall have the pleasure of viewing two of his films at Kurja Polt this year, we are thrilled to be welcoming the “prankster punk” and the “ass-kicking rebel priest” himself all the way from far away Manila!

We will also be welcoming two programme novelties this year. Our newly created Endemic section will henceforth seek and explore genre tendencies in films made in Slovenia and other republics of former Yugoslavia. Commemorating the centenary of one of our central post-war filmmakers, France Štiglic, we shall commence with his dark moral parable and impressive expressionist gem The Ballad of the Trumpet and the Cloud (Balada o trobenti in oblaku, 1961) and, therefore, with a genre that is most endemic to our territories: the partisan film. The native cults, classics and genre benders will be screened with English subtitles so that we may share them with our guest film academics, critics and curators.

Since Kurja Polt nurtures a devoted and joyful passion for genre filmmaking, it is high time that we stoke these flames in our youngest audiences. The new family Matinée welcomes audience members from the youngest to the young at heart to discover thrilling new favourites, or to return to their adventurous beginnings and re-discover cult classics. As it seems apt to inaugurate our new section with an uproarious adventure, we shall commence if not with a bang then at least with a…Roar (1981), an outlandish and thought-provoking alternative to The Lion King. Welcome to the jungle in the company of youth: we have no doubt who they’ll be rooting for…

The Strange Colors of Gilles Vranckx, a two-part exhibition on display at the Slovenian Cinematheque and Kinodvor Gallery, will present selected works by Belgian artist and festival guest Gilles Vranckx. The Brussels-based master of drawing and graphic design counts among the precious few artists keeping alive the once vibrant tradition of hand-drawn film posters, elevating the art form to new heights. Vranckx’s contemporary film posters draw their inspiration from 1970s horror iconography and 1960s psychedelia, merging techniques from the old masters of poster art with current forms of illustration to create the artist’s recognizable signature. His artwork is featured in books and on DVD and LP covers produced by the most prominent genre and cult film labels, such as Arrow Films, Cult Epics and Mondo Macabro. He has created original film posters for classic and cult films, from the works of Hitchcock, Buñuel, Lelouch and Wakamatsu to Argento, Cronenberg, Lynch and Larraz. Perhaps most widely known are Vranckx’s iconic film posters for neo-giallo filmmaking duo Bruno Forzani and Hélène Cattet: Amer (2009), The Strange Color of Your Body’s Tears (L’étrange couleur des larmes de ton corps, 2013) and Let the Corpses Tan (Laissez bronzer les cadavres, 2017).

Friday afternoon will run once again in the spirit of serious theoretical deliberation (and plenty of thrilling video clips) with the 3rd Cult Film Conference, created in collaboration with the University of Northumbria from Newcastle, home to a veritable think-tank of cult and genre cinema. Under the watchful eye of Dr. Russ Hunter, Dr. Steve Jones, Dr. Jamie Sexton and Dr. Alison Peirse will come face to face with cult film’s freakery, the slasher subgenre and women filmmakers in genre cinema. Film criticism workshop Shivering Skin, Sharpening Gaze will unfold yet again under the patronage and mentorship of Kino! magazine to develop our skills in film writing and reviewing. While our How to Make a Fanzine workshop will channel its knack for the bizarre, surreal and seriously funny into creating the third edition of our official festival fanzine Pullum Cutis.

Do not be strange(rs). Join us for another fanatical celebration of the audaciously daring and different cinema, and be genre freaks!