Horror maestro Mario Bava (1914-1980) was born in San Remo as the son of cinematographer and special effects pioneer Eugenio Bava. He grew up among stories of lions biting extras on the set of the legendary Quo Vadis?, “between a miniature and a handful of hyposulfite …Those were heroic times, full of pioneers of a new two-dimensional universe. There were no specialisations. Cyanide and hyposulfite were used to make chemical fondues, and I used to hold an end of the film while my father rubbed it with cotton-wool over our kitchen sink, taking care not to drop any in the salad! That’s the reason why I am a craftsman, after all: I spent my early days in my father’s workshop, which was quite like the workshop of a Renaissance painter. We had to do everything by ourselves, solving problems using only our brain and our enthusiasm; and what mattered was the result, not the money.” 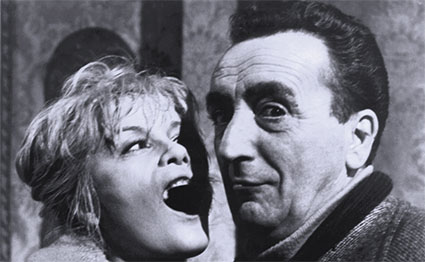 Mario Bava quickly became the quiet phenomenon of Hollywood on the Tiber. With his incredible inventiveness in the special effects arena and his keen, unique eye for cinematography he saved many a troubled film production. As cameraman, DOP and special effects expert he worked along directors G.W. Pabst, Roberto Rossellini, Jacques Tourneur, Riccardo Freda and Raoul Walsh, finishing some of their films as uncredited director. In his own, 19-year-long directorial career he made over 20 films, most famously in the realms of Gothic horror and giallo thrillers, but also adventure films, sword & sandal epics, Westerns, caper comedies, and sci-fi. As a director he honed a unique language and aesthetic sensibility. Initially in expressive black and white photography, later bursting with hallucinatory colours, grotesque, hyper-stylized murder scenes and intricate, illogical plotlines, so typical of Italian genre film, yet imbued with Bava’s gentle and subtle, but at the same time deeply ironic and razor-sharp sense of humour.

A kind and simple man, “an old-fashioned kind of gentleman,” Bava was too humble to accept Dino De Laurentiis’ plead to travel to America and rescue the production of King King (1976). An invitation accepted by Carlo Rambaldi who went on to create special effects on Close Encounters of the Third Kind and receive the Academy Awards for his work on Alien and E.T.

“Mario Bava is my favourite, because he penetrates under your skin, into the unconscious, creating brilliant images that terrorize you. He is a master filmmaker, and I have never seen anything like his films. I discovered them at the drive-in when I was in college in the seventies and, even though I haven’t seen them again for about twenty years, I still remember the impression they made on me. They scared me as much as they were beautiful.”
– Sam Raimi

“We have to keep resisting the idea of official film history, a stately procession of ‘important works’ that leaves some of the most exciting films and filmmakers tucked away in the shadows. Bava’s career – like Sam Fuller’s, Edgar G. Ulmer’s, or Raoul Walsh’s – demonstrates the liberating side of working without prestige or significance hovering over your head. The more disreputable the genre and the lower the budget, the less there is at stake and the freer you are to experiment and explore new territories. Especially when you’re as talented and resourceful as Bava was.”
– Martin Scorsese

“As other movies came and went, you would always remember these. Because they had such a primal impact. They were truly like bringing dreams to life.”
– Tim Burton

“Mario Bava is one of the handful of directors, perhaps five directors, who first became my heroes.”
– Quentin Tarantino

“For aficionados of the horror film, the discovery of Mario Bava’s films ranks high among the richest treasure troves the genre has to offer. Bava’s eye for weird, unearthly atmosphere was unparalleled and as distinctive as a signature. Alone among the horror films of their time, his movies presented – in equal doses – vivid instances of both graphic and suggestive horror. He was not afraid to make the most savage of deaths appear disturbingly beautiful.”
– Tim Lucas, “Terror Pioneer”, Fangoria #42

“With its extreme complexity, the works of bava confound analysis. It would be a mistake to consider him, as a director, on the same level as [Terence Fisher] or even [Tod] Browning. Though he has worked in every film genre, the cinema of Bava has also transcended every genre. /…/ If Bava isn’t the greatest [director of horror films], he is unquestionably the most personal – and perhaps the only genius.”
– Jean-Marie Sabattier, Les classiques du cinéma fantastique

“He was a master of camera movements, the way he imbued a sequence with emotional impact simply, by moving the camera or lowering it, was genius. Like Hitchcock, he used the camera and its movements, the dolly and the crane, as modes of expression and not as ends in themselves. A camera movement is good only when it produces a result. In this respect, he was a master.”
– Dario Argento

“He had a sharp, almost British sense of humour, which is essential to making such films, because you’re always working on a razor’s edge, and you’ve got to be very careful, otherwise you’ll make people laugh instead of scaring them. /…/ My father was a fatalist, and was always well aware of the presence of death as an unavoidable event which cuts off every expectation. Maybe with his films, he even tried to minimise death, to exorcise it. But there was also in him, I think, a longing for the unknown and the unexpected. Because the fantastic is also what we wish would happen, or the chance that something different happens, to let us out of everyday life.”
– Lamberto Bava

“I worked with Bava several times. He was always in a good mood and we went along very well together. He had an extraordinary inventiveness, and he had fun solving the most elaborate technical problems during shooting. Once (remember that film stock was not as sensitive as it is today) he shot a scene in the sunset with the actors in close-up, something which was considered impossible then. On The Devil’s Commandment (I vampire, 1957) we created all the exteriors in a small garden inside the Scalera film studios. Not even the French could believe that our Montmartre and our Seine were made with the help of a few matte paintings! It was Mario who created the monster on Caltiki the Immortal Monster (Caltiki, il mostro immortale, 1959), using – I couldn’t believe my eyes – some tripe. All the effects in the film were the fruit of his ability, whereas my contribution was minimal. Other directors called him whenever they were in trouble, and Mario never refused. Always smiling, he could make a few dozen extras look like a whole army on screen.”
– Riccardo Freda

“He was an incredibly nice man, always ready to joke and laugh, very humble and easy-going… a simple man, an old-fashioned kind of gentleman that you won’t find today, especially in the movie business. /…/ One of the greatest, but also the most underrated artists ever to emerge in the Italian movie industry.”
– Luigi Cozzi, MARIO BAVA – Master of Horror

“Bava was a genius whose only fault was to be born in Italy. Otherwise, he would have been as famous as Hitchcock and greeted as one of the true masters of suspense. /…/ Bava kept thinking of himself as just a craftsman. Then, the French critics started praising is work in Cahiers and Positif, and he told me: ‘Bruno, they are crazy!’ He didn’t even want to move to the US, although he received many offers. Dino called him for King Kong (1976). I told him to accept, as he could get lots of money. He replied: ‘Come on, I am used to working with strings, whereas they have computer-controlled special effects. I would get fired in three days!”
– Bruno Todini

“Mario Bava was perhaps the most important director I have ever worked with. And certainly the most humane.”
– Daria Nicolodi

“To think that I am such a good egg, such a meek and timid guy that I wouldn’t even hurt a fly, because I respect all forms of life… And now I am drowning in a river of blood, full of vampires and floating skeletons!”
– Mario Bava

“You see, I was born smelling movies. My father shot many mythological silent films: he was an artist, sensible and full of talent. That’s why he quit. But he couldn’t stay away from the movie business, so he started making special effects. I grew up watching him and I learned a lot from him. At first, I wanted to become a painter, but it was not a profitable job, so I gave up and followed in my father’s footsteps. Now I am a director and my son is my assistant director. I warned him, but he wouldn’t listen: a family habit, I guess.”
– Mario Bava 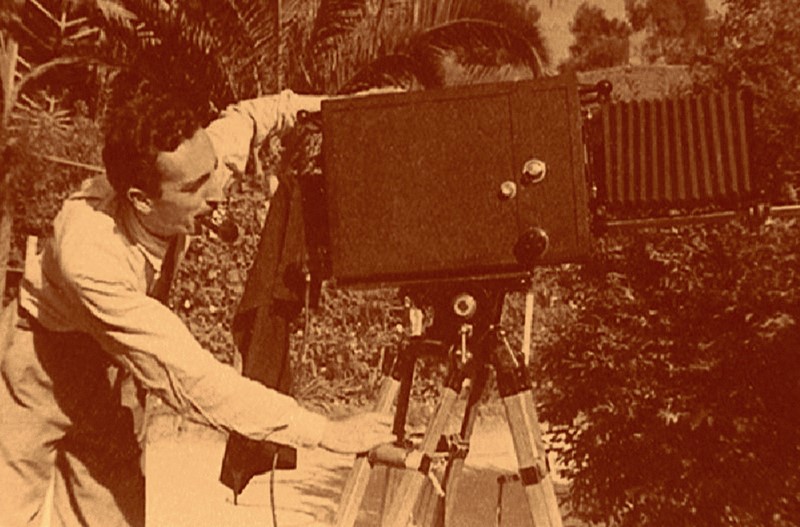 “My father wore a bow-tie and a beret, à la Raffaello; he was an artist. A real bohemian artist. He was a painter, a sculptor, a photographer, a chemist, an electrician, a medium and an inventor, he wasted years and years studying perpetual motion. In 1908 he got involved in the movie business – but that’s a long story. He forgot his past and threw himself wholeheartedly into the ‘Seventh Art’: he became a cameraman (there were no directors of photography then). Several years later, I came to this world, between a miniature and a handful of hyposulfite. I grew up wrapped in film, so to speak. When I was three, I used to play with bits of potassium cyanide… My father never thought I could get poisoned. I knew that it was poison I was playing with, and I knew not to lick my fingers while touching it.”
– Mario Bava

“I had to make films in a hurry: twelve days at most. With everything in my head. I used to shoot having the editing already clear in my mind, knowing where to cut without wasting anything, not even a foot of film. I shot a film with just 8000 feet of film, whereas American directors, like Raoul Walsh for example, used to ‘cover themselves’, as they say. It could even take 20 takes for them to shoot a scene; they were afraid they would forget something. So I once told Raoul Walsh: ‘Why don’t you shoot the whole film framing, say, a brazier, while somebody off-screen reads all the lines? You know, just in case you left something out…’ He got the joke and burst out laughing.”
– Mario Bava

“I could do whatever I wanted over there [in the US]. But I didn’t go. Because to me, and to my generation as well, movies are something which has to be made with just a few inventions, without big budgets and so forth. Creating something using almost nothing. It’s a challenge to yourself. I mean, if you have money like American producers here in Italy, everybody can do the job. But then what’s the point? Where’s the challenge to your brain if you already have everything from the very beginning? De Laurentiis didn’t have a clue on how to end King Kong (1976). There were lots of technical problems. Shooting had been interrupted for a month. He offered me $ 100,000 to put things in good order. Only I would have to move to the US. But I didn’t want to.”
– Mario Bava

“Except for several masterpieces, like Chaplin’s films or All Quiet on the Western Front (1930), when you watch a film which was shot ten years earlier, you can’t help but laugh, and for horror movies, it’s even worse… After just two years they are already dated. /…/ The recent past makes us laugh while the remote past moves us to tears.”
– Mario Bava 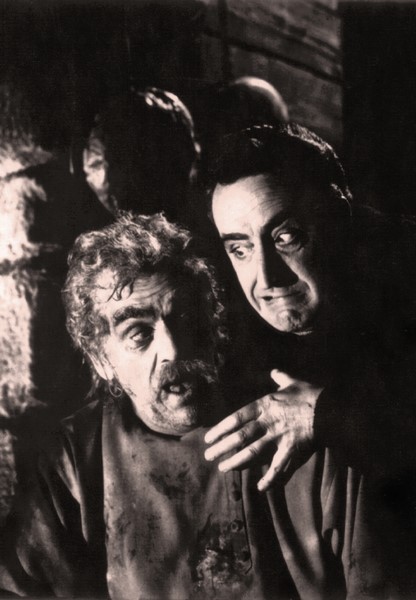