An on-the-lam punk rocker (Kyle Gallner) and a young woman (Emily Skeggs) obsessed with his band go on an unexpected and epic journey together through the decaying suburbs of the American Midwest. Adam Rehmeier’s Dinner in America is a proper, old-school American indie. It’s smart, without being pretentious. Funny, without trying too hard. Anti-romantic, but so darn sexy. Audience award winner at last year’s Neuchâtel Fantastic Film Festival and Rebel with a Cause award at Black Nights in Tallinn.

“Dinner in America is my love letter to the early 90s punk scene in Lincoln, Nebraska that served as the backdrop for my formative years. I grew up playing in bands and spent the better part of two decades 4-tracking in a series of basements, apartments, and lockouts. The DIY ethic instilled through those experiences has informed my creative process and approach to filmmaking. /…/ At its heart, the film is an underdog love story about two very different characters, each marginalized misfits in their own right: Patty, a socially awkward, sheltered 20-year-old escaping her banal existence through punk music; Simon, a snarling anarchist and seemingly toxic punk seeking refuge from the law.”
– Adam Rehmeier

“The engine idles while the two protagonists are maneuvered into place for their meet-cute, but once that happens and the leads’ chemistry supercharges the motor, it really lets rip.”
– Leslie Felperin, The Hollywood Reporter

“A rambunctious mix of anarchic humor and misfit romance. /…/ There are bits of Repo Man, Napoleon Dynamite and other literally or just philosophically ‘punk rock’ cult comedies in the DNA of Adam Carter Rehmeier’s rude yet ingratiating Dinner in America. /…/ Best of all, it’s got a knockout lead performance by Kyle Gallner, who turns an admittedly showy role into something quite likely to become the favorite movie character ever for a small but fervent minority. As the saying goes, a star is born.”
– Dennis Harvey, Variety

“I had a great time with Dinner in America, which may prove to be something of a cult hit under the care of the right distributor. There’s a real sweetness to the film, a smile behind its sneer, so if you’re looking for a romantic comedy about a couple of misfits, one set to a punk-powered soundtrack, you’ll eat this Dinner up. It’s a movie that would make the Johnny Depp from Cry-Baby proud.”
– Jeff Sneider, Collider 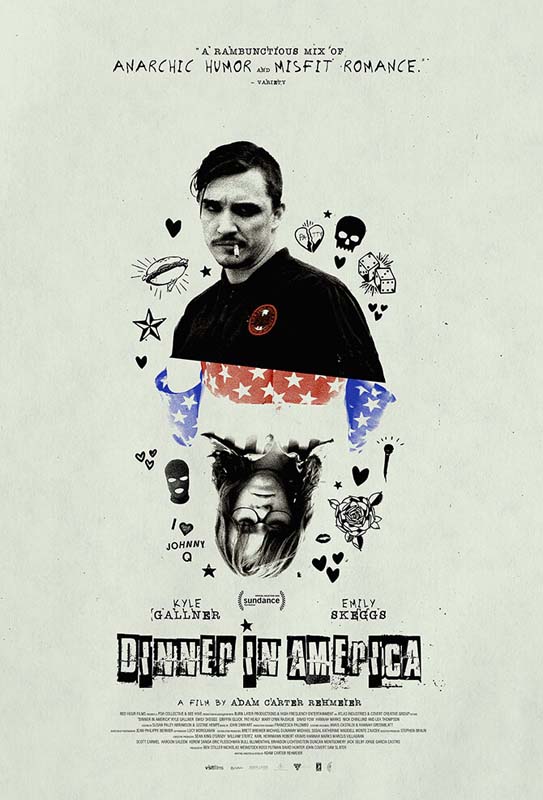