Toggle SlidingBar Area
Under the shadow

Tehran, 1988. The Iran-­Iraq war rumbles into its eighth year and bombing campaigns focus on the city. Blacklisted from medical college after the Revolution, young wife and mother Shideh struggles to retain her independence, if only by exercising with Jane Fonda on her illegal VCR behind closed curtains. But as mother and daughter grapple with these modern terrors, an ancient evil stalks through their apartment, threatening their grip on reality.

A remarkable directorial debut by Iranian-born Babak Anvari, rightfully celebrated on the festival circuit and nominated for best foreign language Academy Award, masterfully morphs from the realism of turbulent daily life into a tense and eerie supernatural tale about all the ghosts of post-revolutionary Iran.

“Relocating a familiar story to an unfamiliar setting often pays off, especially in horror and suspense. Here, circumstances unique to Tehran during the Iran-Iraq War mean heroine Shideh (Rashidi) has to deal with troubles above and beyond being targeted by an evil spirit. If this were Poltergeist, JoBeth Williams could flee a haunted house in the middle of the night without being arrested by religious police who think a woman on the streets without a hijab is a more serious violation of the natural order of things than child-snatching ghosts. /…/ It’s a serious movie about pressure on an independent-minded woman living under Sharia law, but Anvari also delivers an outstanding slow-burn horror film with potent jump scares — one jolt is as well-timed and effective as anything since the hand-from-the-grave in Carrie or the shattered window in Halloween — and a sparingly used but startling toothy apparition. As if mocking the cartoon notion of a spook being a bed sheet with eyeholes, the demon occasionally takes the form of a giant sheet — taunting Shideh as a gargantuan form of the hijab she keeps struggling with.”
– Kim Newman, Empire

“While Under the Shadow has much in common with The Babadook, especially in its portrayal of shared sleep-deprivation in mother and child as well as an interior that morphs into a nightmarescape before our eyes, it is also reminiscent of Roman Polanski’s Repulsion, where grasping arms emerge from hallway walls suddenly, soft like clay, and gigantic cracks shiver across walls and ceiling.”
– Sheila O’Malley, www.rogerebert.com 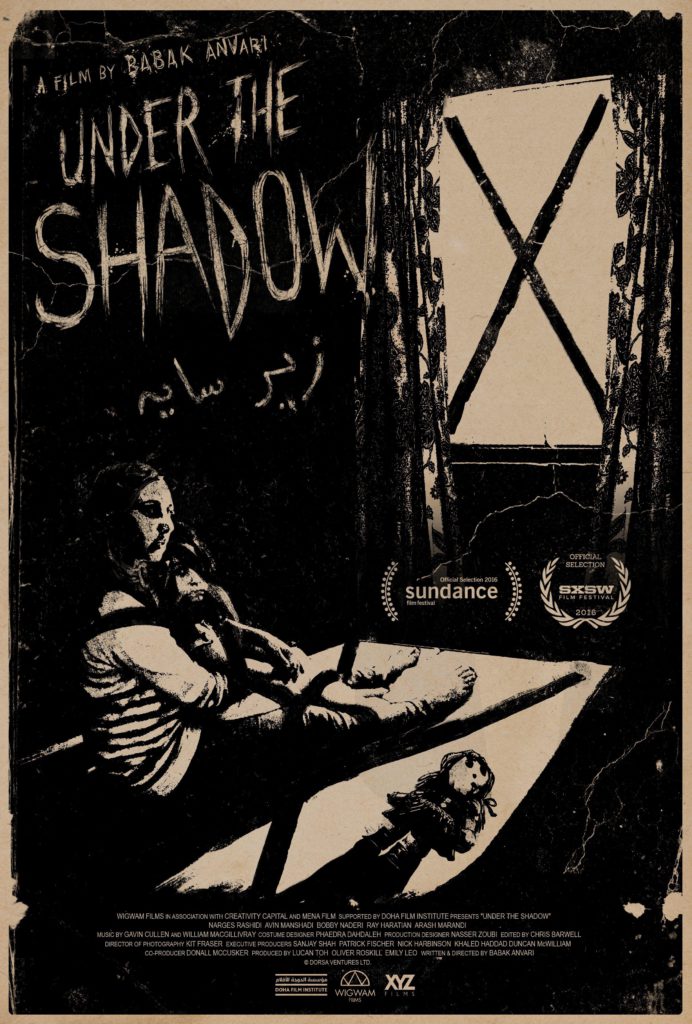