Joël Séria (France), director and writer, started his filmmaking career with no holds barred. His debut feature film Mais ne nous délivrez pas du mal (Don’t Deliver Us from Evil, 1971), a masterpiece of subversive and transgressive cinema, was banned in France upon its release. But today deservedly enjoys its place in the cult film pantheon. At home, the most famous of his films is Les galettes de Pont-Aven (Cookies, 1975), a saucy and sardonic comedy about an umbrella salesman with a fervent affection for female buttocks. The film stars Séria’s regular collaborator and male lead, Jean-Pierre Marielle, who appears again in the subsequent films Charlie et ses deux nénettes (Charlie and His Two Chicks, 1973), Comme la lune (As the Moon, 1977) and Les 2 crocodiles (The Two Crocodiles, 1987). But the filmmaker’s first Thespian muse is no doubt his life partner Jeanne Goupil who first appeared as the teenage girl Anne in Mais ne nous délivrez pas du mal. La Cinémathèque française honoured the marvelously irreverent iconoclast Joël Séria with a retrospective of his works in 2018. 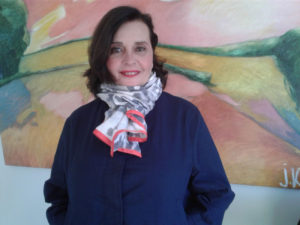 Jeanne Goupil (France) embarked on her acting career alongside Catherine Wagener in the feature film debut by director and her soon to be husband Joël Séria Mais ne nous délivrez pas du mal (Don’t Deliver Us from Evil, 1971). With her innocent, girlish appearance the twenty-year-old Jeanne delivered the uncanny and dangerous role of the devilish Catholic schoolgirl Anne with perfection. A number of feature films and television works followed, directed by Joëlom Sério, among them Charlie et ses deux nénettes (Charlie and His Two Chicks, 1973), Les galettes de Pont-Aven (Cookies, 1975) and Marie-poupée (Marie, the Doll, 1976). She is also active as a painter. Her paintings, signed with the name Jeanne Krier, can be seen in the film Les galettes de Pont-Aven. At Kurja Polt Festival this April we will have the unique opportunity to see Jeanne Goupil in her notorious role in Mais ne nous délivrez pas du mal on screen, and talk to her on stage.

Jörg Buttgereit (Germany), born and based in Berlin, has been called a Trash Poet, a Punk Surrealist and an Underground Icon by the international press. A multifaceted artist, author of stage plays, radio dramas, TV-documentaries and comic books, he also works as a film journalist. But to genre fandom and connoisseurs he is first and foremost the uber-cult director of some of the most controversial films ever made: the notorious Nekromantik (1987) and Nekromantik 2 (1991), the metacinematic meditation on suicide Der Todesking (1990), and one of the most unique contributions to the serial killer subgenre – and for many the culmination of Buttgereit’s film opus – Schramm (1993). His films are strewn with motifs of necrophilia, suicide, (self-)mutilation, cinematic monsters and the horrifying father figure, drawing and commenting on Nazi and Heimat, punk and industrial, classic horror and comic art iconographies. Their production context and ethos are deeply rooted in underground cinema. With their visionary formal play – autonomy of sound in relation to image, the arbitrary transition of dry naturalism into dreamlike, delirious anti-realism, unexpected cuts and camera rotations, etc. – they belong to the avant-garde and the experimental. To quote our friends at Offscreen Film Festival: “He is one of cinema’s most original, innovative and ‘dangerous’ filmmakers. Over the years, these films have lost none of their power to shock.” 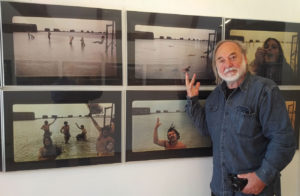 Karpo Godina (Slovenia) is a director, cinematographer and one of the standard-bearers of the Yugoslav Black Wave. An essential figure of Yugoslav cinema, the half-Slovenian, half-Macedonian filmmaker infused the radical Black Wave of the 1960s with an irrepressible expressive freedom, squarely targeted against all forms of repression, and brought a playfully anarchic spirit to the poetics and politics of film. Along his highly regarded features Splav Meduze (The Raft of Medusa, 1980), Rdeči boogie ali Kaj ti je deklica (Red Boogie, 1982) and Umetni raj (Artificial Paradise, 1990), Godina’s influential avant-garde shorts have long enjoyed a legendary status. Among these are Gratinirani mozak Pupilije Ferkeverk (Fried Brains of Pupilija Ferkeverk, 1970), Zdravi ljudi za razonodu (Litany of Happy People, 1971), O ljubavnim veštinama ili film sa 14441 kvadratom (On the Art of Love or a Film with 14441 Frames, 1972) and Nedostaje mi Sonja Heni (I Miss Sonia Henie, 1972). As cinematographer, Godina was a frequent collaborator of Bahrudin “Bato” Čengić, Želimir Žilnik, Lordan Zafranović, and other pioneering members of the Black Wave. When awarded the Underground Spirit award at the European Film Festival in Palić in 2016, Godina responded: “The only thing that was important to me was to catch the spirit of the time.” In his documentary The Making of Sonja Henie (1972–2007) he caught this spirit in flagrante! 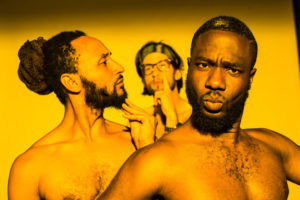 Ghanaian duo FOKN Bois aka M3NSA and Wanlov the Kubolor, who gave us The World’s 1st Pidgin Musical Coz Ov Moni (2010) and it’s sequel, FOKN Revenge (2013), are the most celebrated band in the world due to their most unconventional way of entertaining with ingeniously tasteful shock lyrics, revolutionary performance art and indulgent progressive sonics. The grand yet undeniable misnomer, Afrobeats, never sat well with the FOKN Bois. Not to mention the general themes of superficiality and objectification. So the FOKN Bois – who call their sound “gospel porn rap” – decided to put a spin on things and now we are laughing with them on their new EP Afrobeats LOL (2019), which features emergent superstars like Mr Eazi, Medikal, Sister Deborah, Dex Kwasi, King Stunn, and also high-life icon Gyedu Blay Ambolley. Dubbed by Afropop Wordwide as “the cutting edge of satire in African hip-hop,” their bold, politically charged, taboo-bashing raps have drawn comparisons to duos like Outkast, Flight of the Conchords and Run The Jewels, but many now know to expect anything and everything more from this raw, witty braggadocious and eccentric band. This is not an African thing…Just do the FOKN thing! 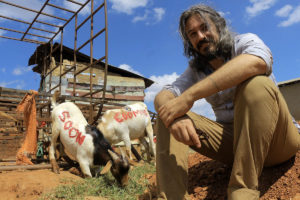 Alan ‘Ssali’ Hofmanis (USA/Uganda), originally from New York, now serves as ambassador, co-producer, and “muzungu” action movie star at Wakaliwood, the viral movie studio based in the slums of Uganda founded by African filmmaker Nabwana I.G.G. (Who Killed Captain Alex?, 2010). Their collaborations include Bad Black (2016), winner of the coveted Audience Award at Fantastic Fest in Austin, Texas, and the child Kung Fu action comedy Crazy World, which premiered at the 2019 Toronto International Film Festival. Once Upon a Time in Uganda, a documentary about their 8-year collaboration, is set for release in 2020. 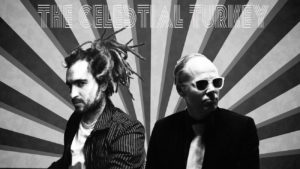 The Celestial Turkey are a Rotterdam-based duet, featuring Stefan Lievestro and Elvis Homan. Elvis Homan is a Slovenian drummer and composer living in Rotterdam. He embarked on his professional career as a member and band leader of Quartzite 4tet, Marco Apicella Trio, The Celestial Turkey, as well as developing his solo project with a focus on film music with which he has collaborated with the prominent International Film Festival Rotterdam (IFFR). He has released 5 albums of original music and performs live at different festivals and venues, such as North Sea Jazz Festival, Otis Park Festival, Maas Theater, De Doelen, Tivoli Vredenburg, and others. As a composer he often collaborates with Big Band Krško and Symphonic Orchestra Novo mesto. Elvis also runs his booking agency Coxa Abstract, is a member of De BIM (Beroepsvereniging van Improviserende Musici), a producer at La Cueva Audio Production, and an educator at School Of Music Rotterdam. Stefan Lievestro (The Netherlands) has performed with a number of international stars over the years, such as Nat Adderley, Bob Berg, Dee Dee Bridgewater, Philip Catherine, Freddie Hubbard, Pat Metheny and Gregory Porter. He currently leads Lievestro6 and Mona Lisa Overdrive (MLOD). He is the founder of Mainland Records, an independent jazz record label. In 2007, Stefan was programmer of the Jazz International Festival in Rotterdam. He teaches at the conservatoria in Gent (Hogeschool Gent – contrabass and bass guitar) and Rotterdam (Codarts – contrabass). They will accompany the silent cult classic Häxan (The Witch, 1922) live with an original score composed for this occasion.

Dr Claire Nally is an Associate Professor of Modern and Contemporary Literature at Northumbria University, UK. She researches Irish Studies, Neo-Victorianism, Gender and Subcultures. She published her first monograph, Envisioning Ireland: W. B. Yeats’s Occult Nationalism (2009), followed by her second book, Selling Ireland: Advertising, Literature and Irish Print Culture 1891–1922 (written with John Strachan, 2012). She has co-edited a volume on Yeats, and two volumes on gender, as well as the library series ‘Gender and Popular Culture’ for Bloomsbury (with Angela Smith). She has written widely on subcultures, including goth and steampunk. Her monograph on this subject, Steampunk: Gender, Subculture and the Neo-Victorian was published by Bloomsbury (2019).

Dr Russ Hunter is a Senior Lecturer in Film and Television in the Department of Arts at Northumbria University. His research focuses on Italian genre cinema, European horror cinema and genre film festivals. He has published on a variety of aspects of Italian and European genre cinema and is the co-editor (with Stefano Baschiera) of Italian Horror Cinema (2016). He is currently writing Italian Horror: A History, which will be published by Edinburgh University Press. He has published in numerous film encyclopedias and reference guides and works closely with a number of European genre film festivals.

Dr Alexia Kannas is Lecturer in Media and Cinema Studies in the School of Media and Communication at RMIT University in Melbourne, Australia and Co-director of the Screen & Sound Cultures Research Group. Her research concerns topics in cult cinema, film genre and performance. She is the author of Deep Red (Columbia University Press/Wallflower, 2017) and GIALLO: Genre, Modernity and Detection in Italian Horror Cinema (SUNY, 2020). 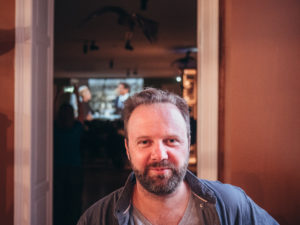 Daniel Cohen (France) is the Artistic Director of the Strasbourg European Fantastic Film Festival. A fan of genre cinema and fantastic worlds since his teen years, he began his career at an art house cinema in Strasbourg in 1999, where he worked principally as a projectionist. In 2006, he founded Spectre Films and organised his first festival, a retrospective of the legendary Hammer Studios. In 2008, with Spectre Films, he founded the current Strasbourg European Fantastic Film Festival. His other activities range from scouting international film markets, participating in festival juries, holding student film conferences and running a genre cinema club throughout the year.

Mario Kozina (Croatia) is a Zagreb based film curator, critic and editor of Filmonaut magazine. He is one of the selectors of 25 FPS International Experimental Film and Video Festival in Zagreb, and a regular contributor to Zagreb Film Festival and International Film Festival Rotterdam. In 2016 he received the Vladimir Vuković Award for Best Film Critic bestowed by the Croatian Society of Film Critics. Since 2019 he is Chief of Programme at cinema Kinoteka in Zagreb.