Machines we are sending to the skies

While on Earth things can revolve around family drama, epic history, romantic comedy, Space is left only with science fiction. Although constantly in its embrace, we are unaware of Space and find nothing traditional in its presence. When the screening shows yet another black screen with sparkling dots dashing from its depth, we enter the world of the alternative.

Although a human invasion into Space in film industry usually justifies colonialism, Space continues to inspire people. Why shouldn’t it? There is enough space and time among the stars to offer a vast landscape for diverse storytelling. Despite this colossal vastness, the film image of Space remains minimally altered since the 1980s and adjusted to the traditional male perspective. Blood Machines, a spectacular sci-fi medium-length film, directed by Raphaël Hernandez and Savitri Joly-Gonfard under the name Seth Ickerman, pays homage to precisely such consensual imagery of Space.

When the spaceship becomes self-aware, it rises out of the mechanical bonds in the form of a naked female body. Amazed by this wonder, the controlling and sadistic intergalactic traveller embarks on a hunt for the cosmic entity, which is protected by other women. To the Friday night viewer, the potentially problematic dichotomy between female empathy and male love of arms and hunting is of no concern. He or she similarly disregards the content since Blood Machines visually surpasses the current standards of the genre. The special effects are so dazzling that a viewer easily forgets the story hiding among the retrofuturistic images of Hajime Sorayama. Even if in Space there is no air and therefore no channel for sound, this intergalactic adventure is accompanied by French electronic music and eroticized female bodies with Justice cross on their genitals.

Space invites not only electronic music but also artificial intelligence as together they have fair chances of ruining the protagonist’s life. As in dystopia, Space is the end of Earth, so artificial intelligence is the end of human consciousness. Combined, they are marvellously horrifying and comforting at the same time since they end not only all that is good but also all that is bad. 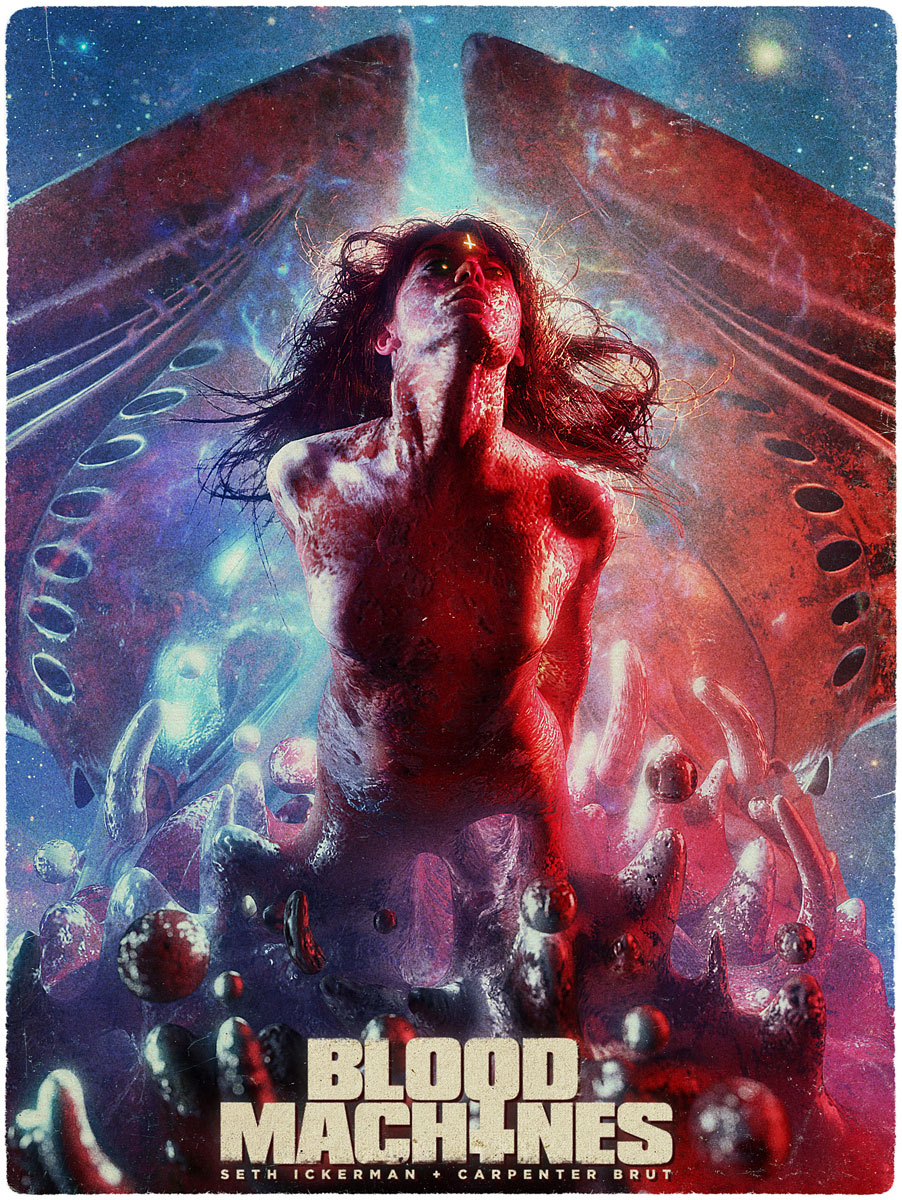 Inspired by the spirit of the 80’s, the retrofuturistic Space Opera BLOOD MACHINES marks the second collaboration by the filmmaking duo Seth Ickerman (Raphaël Hernandez and Savitri Joly-Gonfard) and the synthwave artist Carpenter Brut. It is the sequel to their 2016 music video for Carpenter Brut’s TURBO KILLER.