An abandoned boat is found aimlessly adrift in the local waters of New York City. A corpse-like stowaway attacks the investigating policemen and plunges into the murky waters. News reporter Peter West and a young woman, the daughter of a scientist who has gone missing in the Caribbean, are left with the task of unravelling the mystery. They travel to a remote tropical island where a deadly disease is making the dead walk among the living.

Grande maestro Lucio Fulci’s seminal gorefest takes the zombie back to its Caribbean cradle of black magic and voodoo, and delivers a barrage of splatter landmarks: the eye that meets the splinter, the underwater ballet between a zombie and a live shark. Accompanied by Fabio Frizzi’s cult score and designed by makeup legend Giannetto De Rossi, these are moments to be experienced on the big screen in glorious 35mm! And never to be forgotten again…

“Lucio was a very strange person. Very cultured and artistic on one side, a sleazy bum on the other. Zombie was made for no money, so not only could I not afford to make latex appliances, but we also never knew what extras would be available to be the living dead as they were all homeless itinerant or hopeless winos. I just smeared clay on whoever’s face was in front of me and, by accident, it turned out to be the perfect look for the film.”
– Giannetto De Rossi, makeup artist

“Preceded by the cannibal subgenre by a few years, the zombie used a different motif than the cannibal film and was far more good-natured about it. Zombie films usually centred on man’s ability to screw up his environment, and much like the ‘big bug’ movies of the ‘50s, which were a direct result of the environmental uncertainty created by the atom bomb explosions, zombie films reflect the uncertainty of the late ‘70s society with regard to things like nuclear power and medical breakthroughs. Accidents like the nuclear accident at Three Mile Island or the contamination of Love Canal in the United States, as well as European disasters as the A-1 nuclear spill in Czechoslovakia, added to the Italian imagination that man was somehow screwing up the world. The zombie film is the culmination of that screw-up.”
– Danny Shipka, Perverse Titillation

From the collection of Centro Sperimentale di Cinematografia/Cineteca Nazionale. 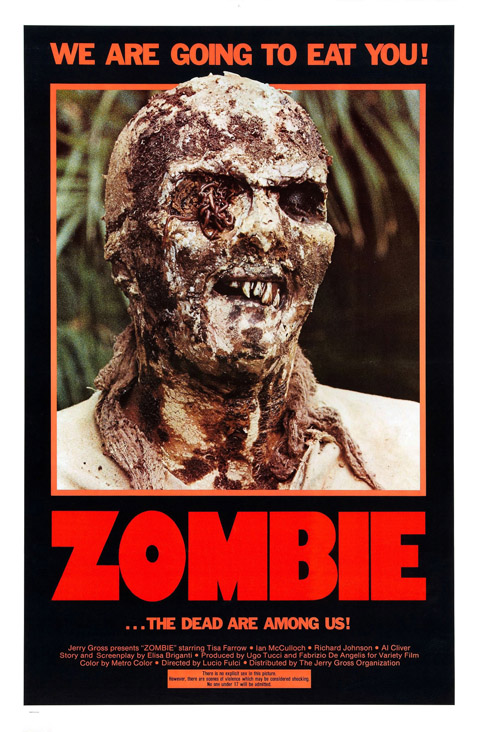